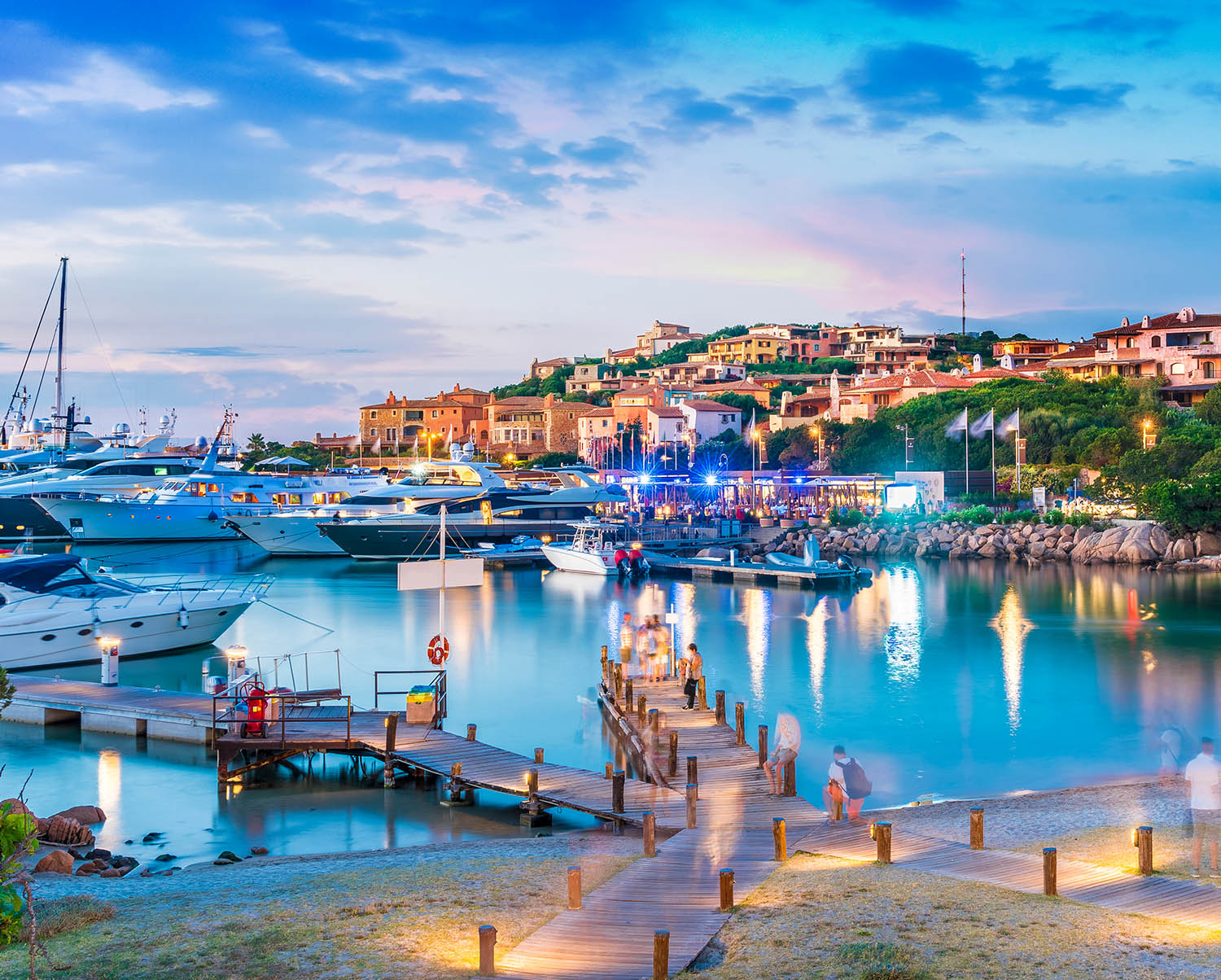 In the North-East coast of Sardinia, we find the famous kingdom of the luxury holidays: an exclusive village in front of the sea, architectural gem surrounded by unique beauties.
Undisputed capital of the Costa Smeralda, Porto Cervo is a district of Arzachena, a town in the Gallura area, with just a few hundred residents. . In the summer, it becomes an extraordinary procession of hundreds of yachts and famous personalities: it is quite usual that you will find yourself in the square, shopping with stars of the cinema and of the TV shows. Every day you have the chance to come across the international jet set protagonists: parties, social events, sports events, golf in particular.
The seaside village emerged around a natural cove that resembles a deer. Since many years it was awarded the Blue Flag for the tourist docks by the FEE ( Foundation for Environmental Education ), thanks to the quality of waters, services and its sustainability. The seaside village emerged around a natural cove that resembles a deer. The old port dates back to the 1960s, when Prince Karim Aga Khan IV, captivated by the beauty of this stretch of coastline, had a brilliant idea when he decided to buy the lands of this part of Gallura and, together to the Swiss-French set designer Jacques Couelle, and later assisted by several Italian architects, he brought life to this paradise of international elite tourism. In the 1980s, the project to build the new tourist port began: today it is one of the biggest and best equipped in the Mediterranean sea (700 boat moorings) headquarters of the Costa Smeralda Yacht Club and leader in organising prestigious regattas. Walking along the docks, you can admire the moored yachts of rich, famous personalities or you can watch them as they leave the port.
The centre of Porto Cervo was built high up on level ground with respect to the port. From Piazzetta delle Chiacchiere to the Sottopiazza there is a series of alleys, windows, balconies, built in typical Costa Smeralda style, as well as shops and boutiques selling prestigious designer items, while, all around, you will find the most prestigious restaurants, luxury hotels, the most fashionable clubs, at the centre of the coast’s nightlife, and impressive villas climbing up the surrounding hills, nestled in the Mediterranean scrub. While studying the project, the prince and his cooperators came up with the idea of creating an architecture that would have maintained a close connection with the typical Gallura architecture, perfectly blending into the environment: it was the key to success. . A rare piece of architecture is the splendid Stella Maris church, an idea of Michele Busiri Vici, which dominates Porto Cervo Marina.
A few steps from the touristic centre there are some breath-taking beaches. The expanse of soft, white sand of the Grande Pevero is lapped by the turquoise, blue and green reflections of the sea, flanked by granite rocks and by Mediterranean scrub. Behind it there are well-kept golf courses that make the area a popular destination for golfers. Separated by a promontory, you will find the Piccolo Pevero, a beach that is less than half the size of its ‘older sister’.
Offshore you can admire the islets of Li Nibani, ‘i gabbiani’. Two kilometres further South, there are other wonders: the Romazzino and the Principe beach (in honour of the Aga Khan). On the opposite end of the ’emerald’ promontory, you will be delighted by charming coves, including Cala di Volpe and Liscia Ruja. Further South, don’t miss the paradise of Cala Capriccioli, beaches of fine, light-coloured sand, protected by yellow, pink and reddish granite rocks. The name Gallurese means ‘goats’, and refers to a pair of huge, polished round boulders that form various coves. The beaches of the east coast are ideal for families, while the west ones include the beaches of ‘Pirata’ and ‘delle Tartarughe’ and is ideal for trekking lovers. The panorama is enhanced by the islands of Soffi and delle Camere and the islet of Mortorio.