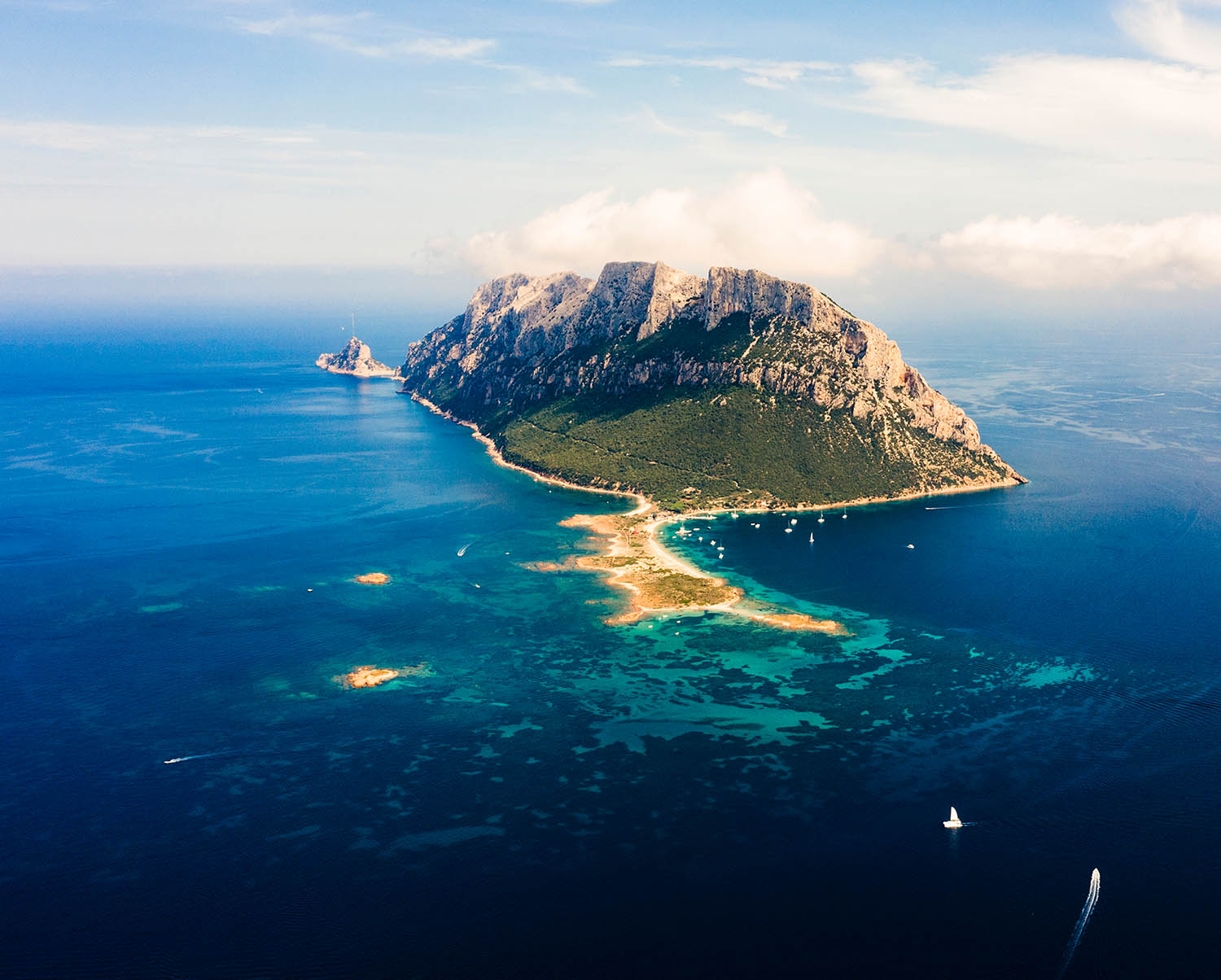 It is famous for being the smallest kingdom in the world. In front of the north-western sardinian coastline, a granitic colossus rises from the sea, dotted with Mediterranean scrub who gaves its name to the Area Marina Protetta. Tavolara is a limestone and granite mountain that rises up from the sea, 560 metres high and four kilometres long, featuring rugged rocks, an impressive and vertiginous verticality together with amazing chromatic shade such as the greens of juniper, rosemary and mastic trees which match with the light blue waters all around.
Tavolara is also the symbol of the so-called Area Marina Protetta di Tavolara, 76 Kms long, from Capo Ceraso to Punta s’Isuledda, full of coves and bays in crystal-clear waters. Molara and Molrotto islands, together with the picturesque island of Proratora, the twins Isola Piana and Isola dei Cavalli as well as the small islands of Porri, Topi Drago, Isolotto Rosso until Capo Coda Cavallo, a strip of granitic land that embraces a big area of sheltered sea. They are all ideal destinations for diving and snorkeling lovers.
Its history is linked to King Charles Albert of Savoy who, according to legend, once arrived on its coasts in search of the legendary goats with teeth of gold (which were probably yellow because of eating helichrysum) named its only inhabitant, Paolo Bertoleoni, king of the island. His descendants are still the only residents (and guardians) on Tavolara.
In the eastern area of “Spalmatore di Terra”, where there is a little port together with few dining facilities and a small group of houses, you will find small beaches, fringed with sea daffodils. The entire territory is dotted with Mediterranean scrub, where yellow helichrysum, wild geranium and “Stellina di Tavolara” (Little star of Tavolara) campanula all stand out. Few of the most popular beaches of San Teodoro ( and of all Gallura area ) are only few minutes far from the island: Cala Brandinchi, full of white sand dunes and transparent waters, its twin Lu Impostu, an arch of almost one kilometres of white sand and diaphanous waters, Cala Surraccia ( well known also as butterflies beach ), Cala Ghjlgolu with its peculiar shapes, La Cinta, the most famous and crowdy beach with its 3 kilometres of very thin sand that close the breath-taking promontory of Puntaldia and, at the southern limit of the maritime area, the so called Isuledda.